Some people might get on their bike to go and get a pint of milk.  Not so Eddie McKnight!  Eddie has been a friend of the family for some years now and has a young family so when he heard the news of Lucie he was moved to get on his bike!  He has already bagged one extraordinary trip in 2011 and is now planning on his next.....

In 2012 Eddie is taking on the “Leprechaun Tour”!  This trip is being completed over 9 days.  This trip is shorter in distance than his trip last year For Lucie (see below) but probably even tougher due to the terrain of the country.  He leaves for Cork and Mizen Head where the challenge is to start with a few other friends. From there he travels through Kenmare, Listowell, Nenagh, Athlone, Carrock Shannon, Omagh and finally to Malin Head on the north coast.  This trip is 459 miles which is an average of 66 miles a day with lots of ups and a few downs!!

Eddie set off from Land’s End with the intention of getting to John O’Groats  and he did exactly that in July 2011!   Eddie was keen to raise funds For Lucie and embarked on his epic 700 mile journey over 10 days last summer.  He experienced all weather conditions and had the misfortune of catching the end of a hurricane that swept across the west coast of Scotland!  One of his group had to withdraw due to injury which only left 3 in the group! As you can see from the pictures he landed up at journeys end on a beautiful and calm day - a perfect end to a superb challenge!

Eddie has a raised a huge amount of money  and at his christmas party in December Trish and Jon arranged for a bit of a surprise for him!  They put together a short video thanking him for all his efforts and had a cheque presented to him in front of about 70 people!  Trish was quick to point out that Kaye his partner was the real star as she had agreed to stay at home and look after the kids! 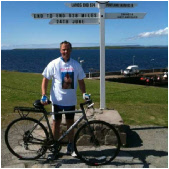 Eddie & Kaye with the cheque 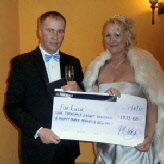 In these time pressured days why not text Eddie your sponsorship. You can text amounts up to £10.  It couldn’t be easier just text EMCK04 £5 to 70070 to give £5.  For those web wizards simply click on the link above to visit Eddie’s Just Giving page.