Emily was our very first fundraiser!   Back in November 2010 Emily was really keen to do something positive out of the death of baby Lucie and so got the utensils out and hit the kitchen single handed!

Emily  spent hours in the kitchen preparing beautiful cakes and cookies to sell at her school.  All of the money she raised went to Meningitis UK and Emily raised £32..

Stamford Childminding group raised over £200 by organising a sponsored toddle at Burghley Park and a quiz at Christmas.  The event was organized by Jan Carter and Wendy respectively and the Childminding Network across the whole of Stamford.  The group presented the cheque to Trish and Francesca on behalf of the group.  Thanks for all your support and efforts! 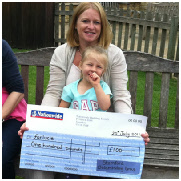 Sarah Lambert got a group of enthusiastic cooks together in late February and organised a Pampered Chef party!  14 people gathered in Witham-on-the-Hill village Hall and enjoyed cooking displays and taster sessions of the fantastic fare that was on offer!

People were extremely kind and donated raffle prizes for the evening and raised £110 on the evening For Lucie!  We wanted to thank Sarah for all her efforts because we know that these events don’t happen on their own and take a huge amount of organising!

Daz who is the brother in law of Simon Howes (one of our trustees) was set to run the Freckleton Half Marathon with Simon, in memory of  Lucie.  But since April when he landed up in intensive care (in Bath of all places!) with pneumonia and septicemia, he hasn't been allowed to run.  On many occasions he has tried to go, thinking he's totally OK, but the numpty has had to admit, he's really not right just yet!  On top of that, Si also pulled out because of moving to Seattle.  So all in all we'd let you down.  Daz and I have felt awful, because we want you to know we pledge our support to 'For Lucie' and Meningitis UK, for the long term, and that we are still thinking of you guys, lots.

So, we laid our cards on the table and told our friends the situation.  They all knew Daz had been training for the half, and they all know the about Lucie.  Bearing this in mind we have used the weekend's 'non' event to fund raise anyway, and have set up a 'Just Giving' page - pushed it through the magic of facebook and Daz has sent a really lovely, informative email to his colleagues at work.  It has done pretty well (all things considered), and is gently nudging up everyday.  Our very good friend Aimee got the all clear from her physio to run the half, and she's doing so in Lucie's memory and has collected her own bits of sponsorship to add to the pot over the next week or so.  She's not allowed to run for three months after today as she has tendenitus, and is being strapped up for the event, but sh'e a gritty northern lass and won't take no for an ans 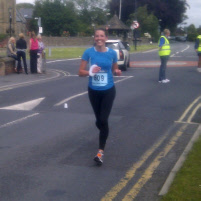 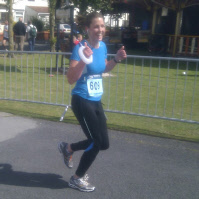 Aimee sprints for the line 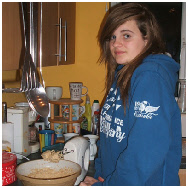 There you are we just came straight out with it.  Chris is taking part in a hardcore 12 mile obstacle course designed by the best special forces in the world - the British special forces!   It is designed to test all round strength, stamina, mental grit and camaraderie.  Tough Mudder is the premier adventure challenge series in the world!  Chris is taking part on the 14th July in Dumfries, Scotland.  Please pledge your support on his Just Giving page.

Chris takes a moment to ponder his sanity 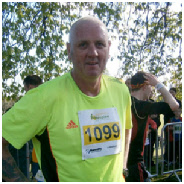