Registered charity number 1140709
A helping hand... in the fight against meningitis

Louise Hewison must be mad.  Most sane people wouldn’t consider running a marathon let alone two, and separated by only 7 days.  Lorraine tells us her story and what motivated pushing herself to such extremes.

I ran this year’s London Marathon ForLuice.  She tells us about her experiences and the big day itself.

In April 2011 I ran Brighton and London Marathons and these events are dedicated to baby Lucie and the Page family.

After running the inaugural Brighton Marathon in 2010 I couldn't resist being a part of such a great event again (in my home town) in 2011. Long distance running is a passion of mine and is incredibly addictive- everyone always wants to beat their own time. However, I hadn't planned on getting a place in the London Marathon exactly one week after Brighton..

Why not run both though?! It would be a great challenge for me and an opportunity to raise money for a good cause.

I heard about Lucie through a mutual friend and I wanted to do anything I could to help 'ForLucie' and 'Meningitis UK' to raise awareness of this terrible disease.

Brighton came first on 10th April and it was a glorious spring day down on the coast. Crowds were out in their thousands and it was an amazing atmosphere and a beautifully sunny spring day. Piers (my partner) and I were both running and although we didn't run it together it was great to know he was sharing the day with me. I completed Brighton Marathon in 4 hours 40 minutes. This day was perfect and I enjoyed every minute even though it was tough at times but what a great training run for the mighty London Marathon on April 17th.

London wasn't such an enjoyable run for me. I was so exhausted from the previous week I really had to dig deep.  It was however a truly great experience.  It is a huge event now with over 35,000 people running and many bands, DJ's and entertainers throughout London and around the course.  We also had the most amazing support from spectators along every step of the way!

Thanks to the encouragement of my friends, family and Trish and Jon Page (Lucie's Mum and Dad) I completed both London and Brighton Marathons in good time and managed to raise a fantastic £1000 for Meningitis UK and in memory of Lucie! 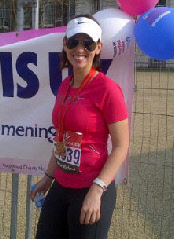 Louise at the end of her second marathon

Donations
Information
About Us