Thurlby Tigers F.C., their squads, coaches and parents completed a 3k Thurlby Fun Run to raise funds ForLucie.  They had set a target of raising £1,000 and smashed it with with a grand total of £1,278.  Some of the members ran in fancy dress and even tied themselves together as a 3-legged entrant.  Many thanks for their great support.

The team show out in full support of For Lucie

We are extremely pleased to announce that Thurlby Tigers and For Lucie are forging ever closer links.  The Tigers who were formed in 2006 and For Lucie have announced that they will be partnering in events over the coming years.  The Tigers have made For Lucie their nominated charity and plan fundraising events once again in 2012.  The main event is of course the Tigers fun run that is held annually in July.  Last year they raised £1300 with over 75 runners.  This year they plan to beat that number!  For Lucie is incredibly honoured to forge these links with such a wonderful family club and really look forward to working with them in 2012 and beyond.

John Lenton (Chairman) and Alex Watson (Secretary) have asked Trish and Jon to be involved in the Tigers annual awards day.  They have created the For Lucie Shield which looks to recognise those who make a significant contribution to the club.  The nominations are made by the teams, volunteers and families and are submitted to Alex and John.  They in turn give all the nominations to Trish and Jon to decide who is the winner for the year!  What pressure!  The announcement is made at the clubs presentation day in May.  What a superb way of recognising unsung heros of a great football club!

For Lucie has teamed up with Thurlby Tigers once again in 2012 and we are aiming to go even bigger and better!  Last year the Tigers raised nearly £1,300 in memory of Lucie.  In 2012 we are looking to better that!

We are looking for individuals and teams to take part in either the Thurlby Tigers 3k or Thurlby 10k race.

The 3k race is part of the Tigers fundraising and they are promising to field over 100 competitors this year.  You can run, walk, crawl, dress up, dress down(!) or get into fancy dress.  Age certainly is not a barrier at this colourful event   It’s a great atmosphere and it’s all in a great cause!

The fun run is for all ages 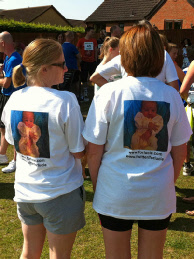 The 10k race is slightly tougher with a couple of long climbs but offers a great route through the quiet roads of South East Lincolnshire.  You take in the villages of Thurlby, Manthorpe, Wilsthorpe and Obthorpe.   It doesn’t matter if you want to take part as a lone athlete or make a team as we are looking for as many runners and riders as we can muster for this fantastic event!  Why not get a team together and challenge another to beat their combined score?

Where? - It starts on the playing fields of Lawrence Park in the centre of Thurlby Village. The address is:  Crown Lane. Thurlby. Bourne. Lincolnshire. PE10 0EZ.

How much? For the Fun Run (3k) it’s £4 per runner in advance and £5 on the day.  For the not so Fun Run (10k) it is £10 (TBC).  We are also looking for people to get sponsorship and we have set up a special Thurlby Tigers area on our Just Giving Page at www.justgiving/forluc

Alex, John and Tigers are doing their part once again to raise funds at the Thurlby Fun Run.  You can pledge their support by joining their team or sponsoring them by click below

Alternatively you can pledge money via text with the following details.  You can pledge any amount and remember to respond to texts to reclaim gift aid